We have seen in the article about sea-state that in water shallower than half the wavelength, the seabed starts to interfere with the wave structure. It slows the waves down, they pile up, get shorter, steeper and higher. An underwater obstacle such as a seamount or offshore reef can cause a bigger wave than usual to rear up, apparently out of nowhere, and break, sometimes with tremendous violence. In the North Atlantic, the swell’s wavelength can be 500m or more, and because it’s the wavelength that influences this effect, breaking waves can happen in surprisingly deep water and with little warning.

On a large scale this also happens at the continental shelf. At the edge of the continental shelf the seafloor rises sharply from 4000m to 200m. This is less than half the wavelength so it affects the sea state. To add to the problem, the continental shelf slows down the momentum of the leading swells allowing the ones behind to catch up. The wave heights stay the same; it’s just that the peaks become closer together and the wave faces become steep and treacherous. This is one reason for the fearsome reputation of the Bay of Biscay.
The lee-shore of the Moroccan coast at Rabat is another location where ocean swell breaks on the shallow coastline. The swell could originate from a depression more then 1500nm away, causing breaking waves in an area with little or no wind. 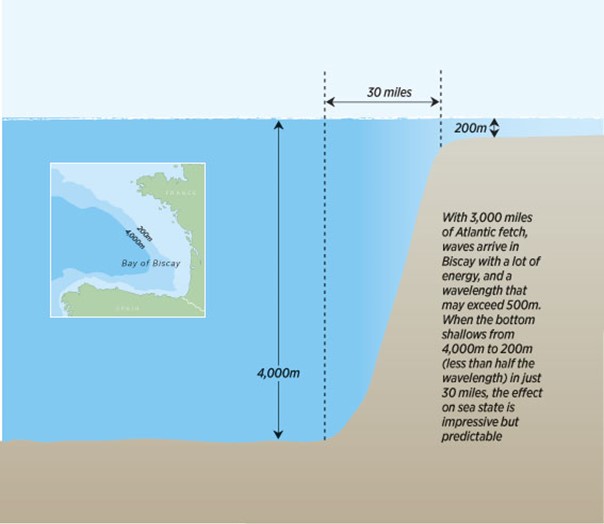